Welcome to day one of the Blogger Book Fair,! Today author Sophie Duncan talks about vampires in fiction and whether or not they’ve been overused. Read on for her thoughts on this much-visited fictional creature and enter the giveaway below for a chance to win a copy of her own vampire book: Death in the Family.

Firstly, thank you Becca for having me on your blog during the wonderful Blogger Book Fair.

So, now onto my subject for today: vampires. Now, we’ve had everything from the classic count in Dracula, all the way through to sparkly Twilight and beyond to Twilight fanfic erotica outselling the original with the vampires removed! So, since we’ve come this far, are vampires all done in? Have we seen all that we want to see? Should we all move on to zombies or werewolves?

Well, I’m not going to hold y’all in suspense for my answer, because, much as I have a soft spot for werewolves and Warm Bodies has indeed warmed me to zombies, nothing for me compares to the allure of the nightly ones. 🙂 So, now, for the bext few paragraphs, I’m going to explain why I don’t think vampires are finished. 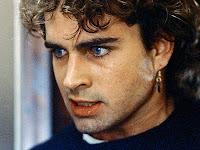 One thing that the vampire genre has in its favour, for me, is the sheer variety of it. If you like pouty hundred-year-old teens, then Edward is right there for you, but if you like a suave older man, you can always turn to Count Dracula in his many, many guises. Personally, I’m a vampire hybrid fan, so the likes of Michael half-turned in The Lost Boys catches my interest. I’m also a fan of Blade. 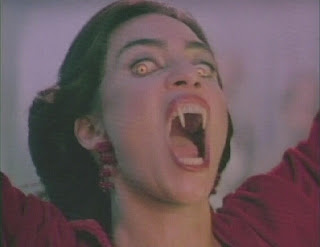 There is a huge wealth of vampire plots to choose from too and, I think, yet to come. Vampires can be the big bad guy, the ultimate evil that has to be defeated, who uses his or her powers to seduce and kill, like Dracula. Then again, a vampire can have motives other than killing to live, such as Regine in Fright Night II, she’s out to avenge the death of her brother, and boy is she sexy as she goes about it! Vampires can even be turned into comedy, such as Sundown: The Vampire in Retreat, where the vampires are all living happily with sunblock and artificial blood in a little town in the middle of nowhere. I’d also throw in Vamp and I Was a Teenage Vampire into this mix. 🙂 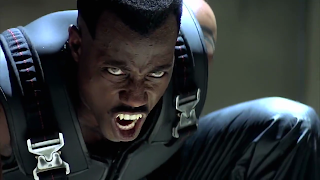 As I mentioned earlier, when it comes to plots, I like the struggle of the half-vampire, the conflict between instinct and morality. Blade does this well, introducing a classic Achilles Heel into the mix with Blade’s dependency on the serum he takes to stave off the need for blood.

I was influenced by my love of hybrids when developing my own main character, Tom, for my Heritage is Deadly series of books. Tom was born to  a human woman, but his father was a powerful vampire. However, unlike stories like Blade, where the protagonist is aware of their ancestry, I wanted to explore how science could have explained away any peculiarities in Tom, who does not know his own history. Thus, he has been living all his life with what his doctor calls a ‘protein deficiency’, which, when he is stressed, sometimes requires him to eat rare meat to avoid stomach cramps. However, Tom’s unusual traits begin to multiply at the start of the story, dragging the reader and Tom away from science and into the paranormal as Tom returns to the village where he was born to find out more about himself.

So, since I’m writing vampires and am currently finishing off book 2 in The Heritage is Deadly series, I know I’m biased, but I think there is a wealth of vampire lore yet to be written/watched and I look forward to it!

~
If you like books about vampires, here’s a chance to win a copy of my book, Death In The Family.
a Rafflecopter giveaway 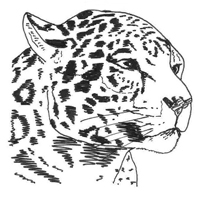 About the author of this article:

Other places Sophie would love to connect with you are: 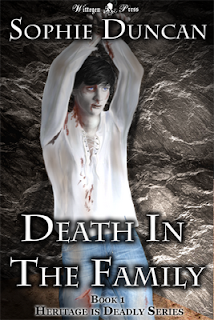 Tom Franklin has never really understood his midnight cravings for red meat, he has merely accepted them. His Harley Street doctor had always diagnosed his symptoms as a protein deficiency, aggravated by stress, particularly the dark dreams that haunt his subconscious. Yet, when his dreams and consequently his symptoms escalate, Tom’s parents are forced to reveal the truth: he isn’t human. Tom discovers that the nightmarish images of dark places and even darker instincts are in fact repressed memories of his early childhood, and he must face the wild heritage from his birth-father, a ruthless vampire known only as Raxos.

Realising his memories are his only hope of controlling his awakening instincts, Tom returns to, Coombedown, the sleepy, Cornish village in which he was born, unknowing that the night-breed in his veins will lead him into danger.

Tom could hold on no more, he let out a gasp of breath and then his world shifted into one of silver-greys. Knife and fork went skidding off the plate as Tom grabbed the large hunk of dripping beef in both hands and lifted it to his mouth. Urgently, he sunk his teeth into the thick flesh. Blood and meat hit his tongue and Tom almost melted with relief. His senses closed around the bite, his body settled, aches and pains fading almost instantly, and there was no stopping him after that.

Sharp teeth and sharper claws were all Tom needed to rip the steak apart, devouring every decadent morsel like he hadn’t eaten in weeks. Every mouthful made the power in his belly spin faster, until his senses were almost breaking out of his body in the way they touched the world. The sensations were divine, intoxicating and Tom grinned around his meal, lost to the sheer satisfaction.

Yet, the meat did not last long and, gasping away the intensity, Tom looked down at his empty, bloodied hands, reality sinking back in. He could feel the juices running down and dripping off his chin. He was a mess. Yet, Tom could not put the genie back into the bottle, and, despite his very human disgust at what he had done, the night was still in him, seducing his senses.

Conflict was nothing new to Tom that day, and he chose to stall it with immediate considerations. Tom hated being dirty. That ingrained part of his character helped hold back the clash in his split psyche and, climbing out of bed, Tom headed to his en suite bathroom. He ignored the light as he went in and kept his head down, not wanting to see the sight he had made of himself. He knocked the mixer tap with his elbow and quickly ran his hands under it. Then he splashed his face, another sort of relief hitting him as he cleansed his skin of the evidence that he had lost control.

Yet, water could not wash everything away and Tom could not quite avoid the large mirror above the sink. His vision remained shifted, so the low light in the enclosed room could not help him and Tom looked. What he saw froze him with both the familiarity of it and the newness. His face, his messy brown hair, yet, it was his eyes that drew him in; at first, alarmed, he thought they were glowing. Trying to stay calm, Tom grappled onto any facts he could remember from his talk with Dr Cheringham. To be honest, he didn’t remember many details, but enough came back that he stopped himself running away and hiding under the covers again with the knowledge that the cells in his eyes were just shining as they absorbed as much light as they could.

Shock dissipating, Tom dropped his gaze and stepped back from the sink. His hands and face were now clean again, but his shirt was covered in gore, so he hastily pulled it off. He heard the material rip as he misjudged his own strength and, throwing the clothing at the laundry basket, he could not miss the thick, sharp claw-like nails that had caused the damage. It was all too much too quickly and, keeping his mouth firmly shut, Tom retreated from his reflection.

Sinking back onto the bed, he curled up into his protective ball again, closed his eyes and tried desperately to bring the world back under control.

Freebies, Sales, and Books Galore at the BBF

8 thoughts on “The Vampire – Has The Nightcrawler Been Over Done? Guest Post & Giveaway #BBF”